The BLOODHOUND land-speed record car and the team behind it are visiting the Isle of Man - BLOODHOUND is the ambitious programme to set a new land speed record with a supersonic car capable of reaching 1,000mph. 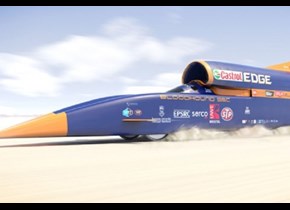 An innovative scheme to break the land speed world record is being used to sniff out students thinking of entering the engineering sector.

The BLOODHOUND project is aiming to build a supersonic car capable of achieving 1000 mph - and parts of the vehicle are being manufactured at Swagelok in Braddan.

The car will be driven by Andy Green OBE - and both he and a full sized show car will be at the Motor Museum in Jurby on the 22nd of this month.

Students from across the Island will have a chance to quiz the former RAF fighter pilot about the project and the car itself.

Bloodhound will be available for public perusal on the 23rd.

Listen to the radio interview