Students in the Isle of Man are to get involved in a project to create the fastest car ever. The Isle of Man Examiner interviews the team for an insight into what it's like to be the fastest man on the planet, and working on this impressive engineering project. 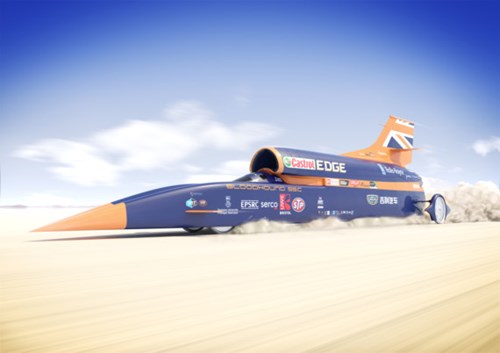 Bloodhound SSC is being built to break the 1,000mph barrier. The SSC stands for a supersonic car.

But the British scheme, helmed by the former fastest man on earth Richard Noble, has gone global with pupils from around the world being allowed to follow the project and share data from it.

Members of the Bloodhound SSC team will be in the Isle of Man later this week to talk to students about the project, with the aim of inspiring talented youngsters into a career in the engineering industry.

Visitors to the Isle of Man Motor Museum on Saturday will also have the chance to learn more about the bid to set a new land speed world record.

Richard Noble with the Bloodhound car. Picture by Stefan Marjoram

Bloodhound project director Richard Noble took time out from a hectic schedule - the car is due to have its first test with a 200mph run out at Newquay in a little over two weeks - to talk to the Isle of Man Examiner about the project.

’It is one of the most exciting things I can imagine,’ he said. ’I come from an age when Britain was leading the world with supersonic aircraft and things like cars.

’The opportunity to build a car that goes faster than any jet fighter is a whole new thing.’

Richard should know what he’s talking about. There is a generation of people who spent their early evenings watching, on John Craven’s Newsround and Blue Peter, as he drove Thrust2 to a world-record land speed of 633.468mph in the Nevada desert in 1983.

He then handed the wheel to Andy Green - who will be Bloodhound SSC’s driver - but led the project that saw ThrustSSC set a new world record in 1997, at 763.035mph.

’Building a car like those is just a fantastic challenge,’ he said, adding that a rivalry with America had given everything a competitive edge.

’We broke the sound barrier, then the Americans decided they were going to come back. There was a very possible challenge, so we decided we would take them on.’

Part of the motivation for the Bloodhound project, he said, was to reinvigorate the engineering industry in the British Isles and to inspire a new generation of young people with skills. The UK Government saw the opportunity to harness interest and got involved.

’We found there was an absolutely diabolical situation in Britain where the industry simply couldn’t recruit scientists and engineers,’ he said.

That looks set to change. The Bloodhound scheme is the largest STEM (science, technology, engineering and maths) programme in Britain. There were 129,000 school children involved last year.

It is something that thrills Richard and he is excited about the continued expansion to engage students around the world.

The visit from the Bloodhound SSC team to the island coincides with the launch of a special set of stamps by the Isle of Man Post Office. It also offers a chance to say thank you to acknowledge the Manx input in the project at a design and engineering level. Swagelok created an essential regulator that will play a crucial role in the car’s fuel system.

The attempt at breaking the 1,000mph barrier is set to take place in a South African desert in 2019, although Richard is hoping that may come forward to 2018. He is confident another major step, of breaking 800mph, will be achieved next year. It will, at that stage, give the team the crucial information it will need to make further modifications to hit four figures.

Before all that will come the testing at Newquay next month.

And some team members will make the trip to the Isle of Man this Friday and Saturday with a full-scale model of the car, which the public will be able to see at the Isle of Man Motor Museum tomorrow (Saturday). Team members will explain to students just how important every single component is to the success of the project.

’It has been a tough road, as you can imagine,’ Richard added. ’We are very grateful to the likes of Swagelok, who have helped us, and now we have got the Isle of Man stamps, which is just absolutely amazing.’

There are few people who have traveled as fast as Richard. So, what is that like?

’So, you take the decision, you take the risk. You have built up a fantastic team of people who are all hell-bent on being thorough, so your job every day as a driver is to go out and drive this thing, to drive it on a pre-determined route and gradually, with each one, go faster and faster.

’Eventually, you get the record.’

He added: ’After that, I have always had a huge problem not driving really fast!’

It begs one final question.

What does the former fastest man on Earth, who subsequently built the fastest car on Earth and is developing a vehicle that will leave a 1000mph scorched earth, drive on his day off?

The answer? A Volkswagen Golf. View of the internal workings of the Bloodhound

This article was written and published by the Isle of Man Examiner.